Social Media Guide: Which Platform is Right for your Business? 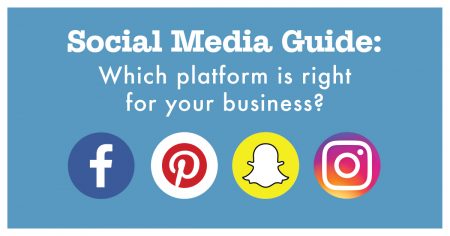 Over two years ago we talked about what social media platforms to use and today we’re going to revisit this topic. The landscape of Social Media is always changing, since that blog post, 45 million brands have been added to Facebook. Snapchat has become very prominent and Vine, which at one time became extremely popular just recently shut down. Lastly, Instagram and Facebook have been tied closer ever since its purchase. Picking the right social media platform is essential for businesses to spend their time wisely to maximize their time on investment. Here at Ready Artwork, we’ll give you a quick run down by providing you a guide on the unique features of each social media channel. We’ll also provide some key demographics for you to have a better idea as to which platform is ideal for your company.

Facebook is still king and is a great platform for sharing all sorts of content including news, deals, photos and videos. Just last year the company introduced Facebook Live which allows users to broadcast live content allowing fans and followers to engage directly and in real time. Adopting of Facebook has grown significantly, with not 60 million brands on Facebook. In the fashion industry alone, virtually all fashion brands have adopted facebook.

8 in 10 Americans now use Facebook which is more than double every other social media platform. Globally, 1.18 Billion users log in daily and 1.66 Billion are active mobile users. A statistic that highlights the importance of responsive website design. Demographically, the 25-34 age group still makes up the majority and people ages 65+ who use Facebook, have continually grown year after year.

If you’re selling to young females you’re in luck, Instagram users skew towards female and over half of users are between the ages of 18 to 29. Additionally, statistics that businesses should give extra attention are that

Pinterest is a photo sharing social network that allows users to save, sort, upload known as a “pin” to their customized “boards”, which can be shared to others. On Pinterest:

Pinterest is a great platform for companies that want to advertise or emphasize marketing services or products with eye catching visuals with minimal text. The great bonus of Pinterest is that the more pins you upload from your own website acts as a marketing tool since pinterest can redirect users to your website potentially leading to a point of sale.

Snapchat released in 2011 and is photo sharing and messaging app that allows users to send messages. They are most often sent in a photo or video format that can be viewed for a limited and specific amount of time before the content disappears. Demographically, ages 18-24 year olds account for 45% of it user base in the US. Last year, it was surveyed as the most popular social media networking application by teens. Snapchat is great for building a brand’s personality, due to its limited content length and restrictions on uploading previously recorded content, brands are forced to creatively think of ways to engage their fans. Often, fans can often see raw footage, behind the scenes or companies employees or projects currently in development. For example, AU79 Teahouse gives its fan exclusive content and early access to weekly giveaways and contests.

We hope that this quick rundown will give you a sense on the opportunities social media can provide your business. Although some of these numbers might seem intimidating, with the right strategy your business can break through the noise. If your business is thinking about getting started on social media, let us help you, give us a call!